What do we know about Mark Barron the young man from Alabama who may have been slow to make his place in league, but has gone on to become one of the best insider linebackers the game has known.

What does Mark Barron mean by  “I want to be the Light”?, read on to discover his true calling in life.

Let’s read and discover where this young man who was raised in Pritchard, Alabama found his dream. A dream to be the best there could be in NFL. 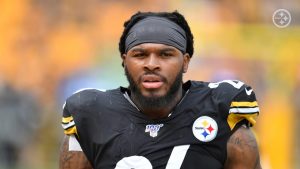 Pittsburg Steelers Mark Barron “I want to be that light”

Week 1, 2019 season Mark Barron made his debut with the Steelers, and even though they lost 33-3  against the New England Patriots, Mark made 6 tackles.

Week 4 against the Cincinnati Bengals Mark Barron managed an amazing 11 tackles and the Pittsburgh Steelers won 27-3, a score to be proud of.

Mark was released from the Steelers in March 2020, signing  a contract with Denver Broncos.

Let’s take a look at where Mark Barron’s choice of becoming a NFL legend has taken him.

Mark Barron “I want to be the light”! What did he mean by this! How has this affected his career?

Mark Barron had a dream to simply play football, and this was something he would achieve without guidance of his father.

He did not have someone to guide him, to set an example for him, this was a dream he alone had and was determined to achieve and indeed he did.

Growing up in the Bessemer projects in Pritchard, Alabama was not the ideal place to be inspired or get inspired to reach your dream.

Mark was one of 4 siblings with a young brother and 2 older sister’s, his mother Michelle work very hard, and raised her children with their grandmother’s help. Barron recalls he was with grandma every day.

Playing with the kids around the area he fell in love with football and this is where it started, Mark Barron’s dream.

Mark Barron emerged as a star in the making as a two-time All-American and also as a three-time All-SEC selection getting a scholarship to Alabama.

In 2012 NFL Draft he was selected by the Tampa Bay Buccaneers, but traded in 2014 to the Los Angeles Rams.

Then in 2018 Mark is released by The Rams and finds himself an unrestricted free agent and he puts the trade down to the fact he had been injured a lot and had been through three surgeries and said “I am happy where I am”.

Mark Barron led by his beliefs  are the Love of Football, his family who have been there for him to motivate him and his belief in God and what he has set out in life for him.

Part of his mission has been to help kids from the area he grew up and around. Mark Barron is doing this through an annual football camp that kids can attend for free in Mobile which neighbours Prichard.  Mark believes if you don’t believe in yourself it is over before you start.

Mark Barron wants to be the light for these kids, show them that even though the world around them is pretty tough and messed up, he will be their motivator.